I cannot believe it … the competition is a DRAW.

A late afternoon flurry of results led to HHH recovering a few extra points today, leaving the final head-to-head standings at 18pts to BRR and 16pts to HHH.

However, when we take into account the second element of the competition (average of age grading for runners in each team), HHH take 18pts (71.2% average) compared with BRR’s 16pts (65.0% average).

This means each club scored 34pts for the competition, and we've drawn - hand shakes (or foot taps perhaps?) all round.

A big thank you to everyone that took part, and particular thanks from Ben and Tom go to those that have supported with collecting and sharing details of runners, and also supporting with mini age-grade and Excel related meltdowns along the way.

Full results are presented in the table below.  But before that, some trivia from the competition: 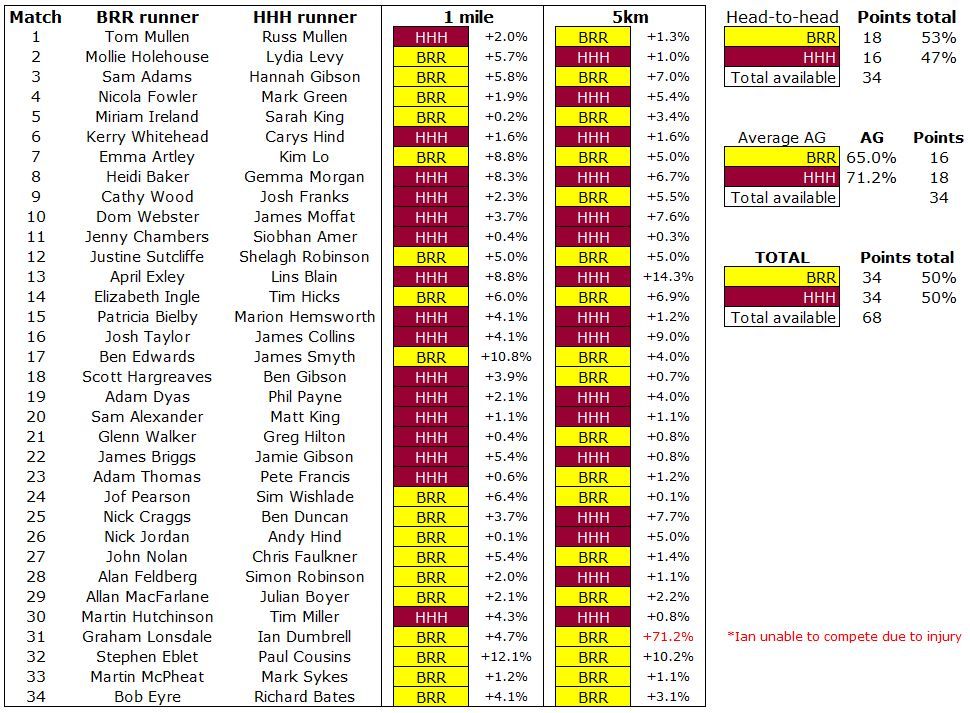 113 out of 136 times have been submitted and we await more times for some runs we know have been completed.

23.5 out of 34pts have been decided, and the results sheet has turned a slightly darker shade of beetroot, but yellow still predominates within BRR leading 14pts to HHH's 9.5pts.

We've seen a few mile and 5km runs being completed back to back - madness, but good effort!

Remember folks, there's a team element to this competition worth 50% of the points: a comparison of non-handicapped age grades averaged across each club.  It looks as though HHH may be taking a couple of points in this element (whoop). 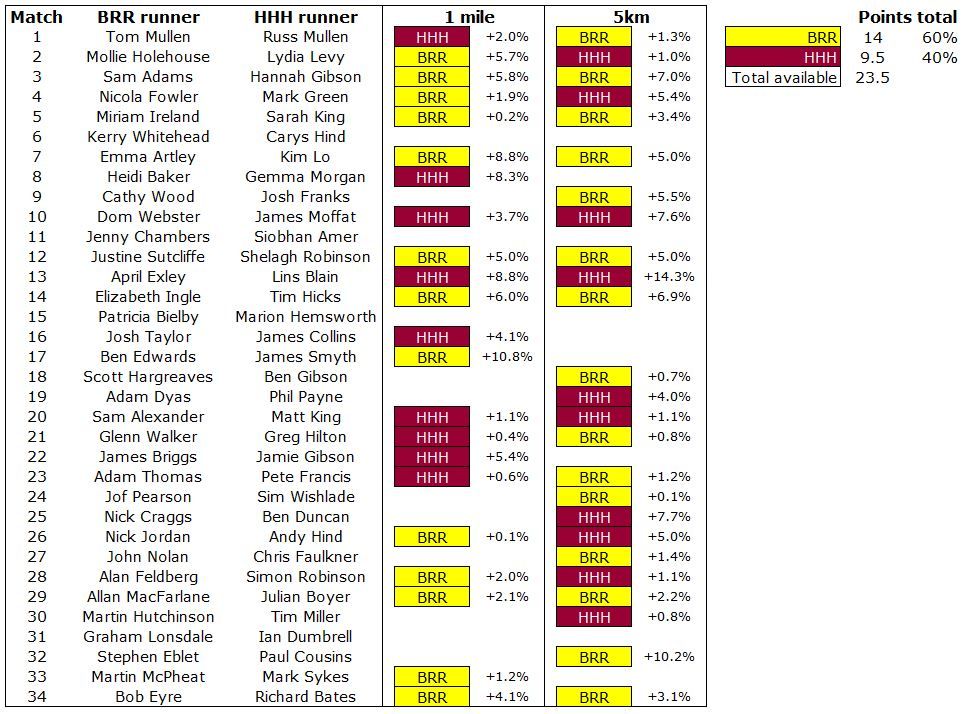 A bit of early morning reading...

On reflection, the explanation provided in yesterday evening's update (below) for scoring calculations was overly simplistic and a bit misleading as it does not explain the merit/time implications of both runners achieving 1%. Indeed, after writing it the author was even a bit confused and had to check back on the calculations.  So, please find below more detailed (still confusing?) text on the matter if you are interested...

The previous explanation was overly simplistic, as for instance: it is reasonable to consider that it is harder for a higher age grader e.g. the world record holder in their age grade (100% age grading) to improve by a given amount of time (e.g. 10s) compared with someone with a lower age grading (e.g. at the extreme end of things a 1% age grader). After all, the speed you need to run to achieve the 10s increases at a greater rate for the faster runner.

So, if we take our A and B runners below again, assuming they are both male and 40 years old:

76 out of 136 runs have been completed (we're over half way!), and 22 head-to-heads for an event have been confirmed.  Well done to the runners that ventured out today, it must have been grim out there for some!

The standings: Bridlington lead 7pts to Haywards Heath's 4pts. Plenty of racing left ahead of us, with 13 pairings yet to record an outcome for either the mile and 5km, so this all could change.

A reminder: There have been a couple of Stewards Enquiries about some downhill routes - flat runs only please!

A few people have asked for more details of how the scoring works.  Please see an example below which I hope will make this clearer. 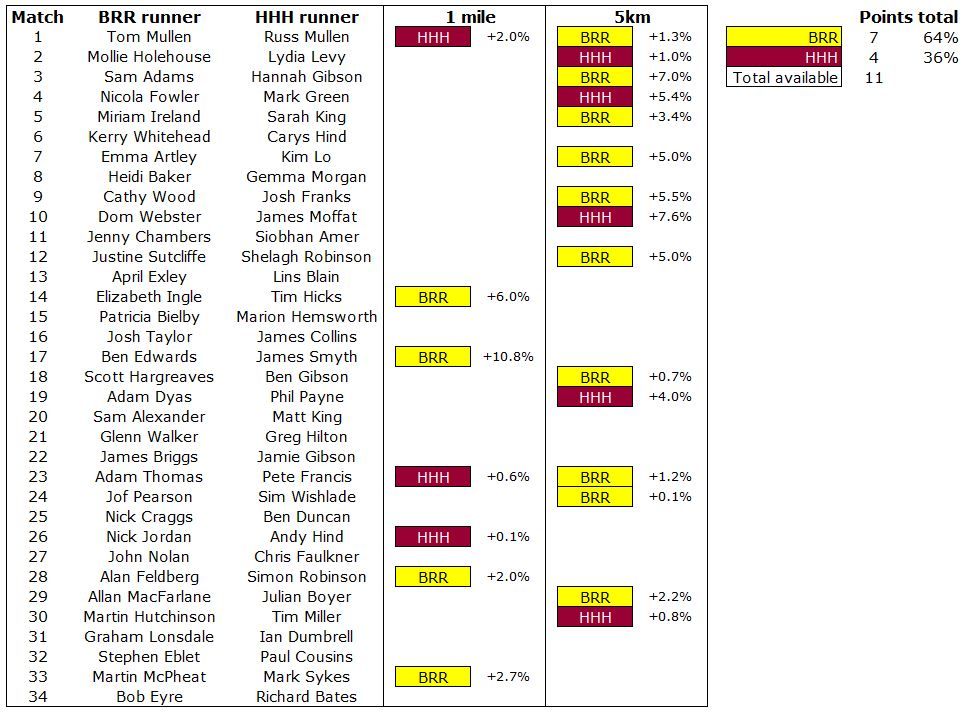 59 out of 136 runs have been completed, and 13 head-to-heads for an event have been confirmed.  Bridlington lead 4pts to Haywards Heath's 2.5pts.  More PBs have been set this morning - very well done!
In the battle of the Mullens, it is currently a draw, with Russ taking the mile crown and Tom the 5km.  Will one or both of them head out tomorrow to try and claim a full point from the head-to-head?

Team update: Jamie Gibson is stepping in for Matt Cook in pairing #22 (rest that back Matt!) - James Briggs you have a new competitor!  That makes three Gibson's in the competition.  No doubt El Presidente and club treasurer John Rix will be delighted at this: not only do they have another club to consider the frequency of same-birthdays, but they will be able to pore of endless spreadsheet analysis of Surnames next. 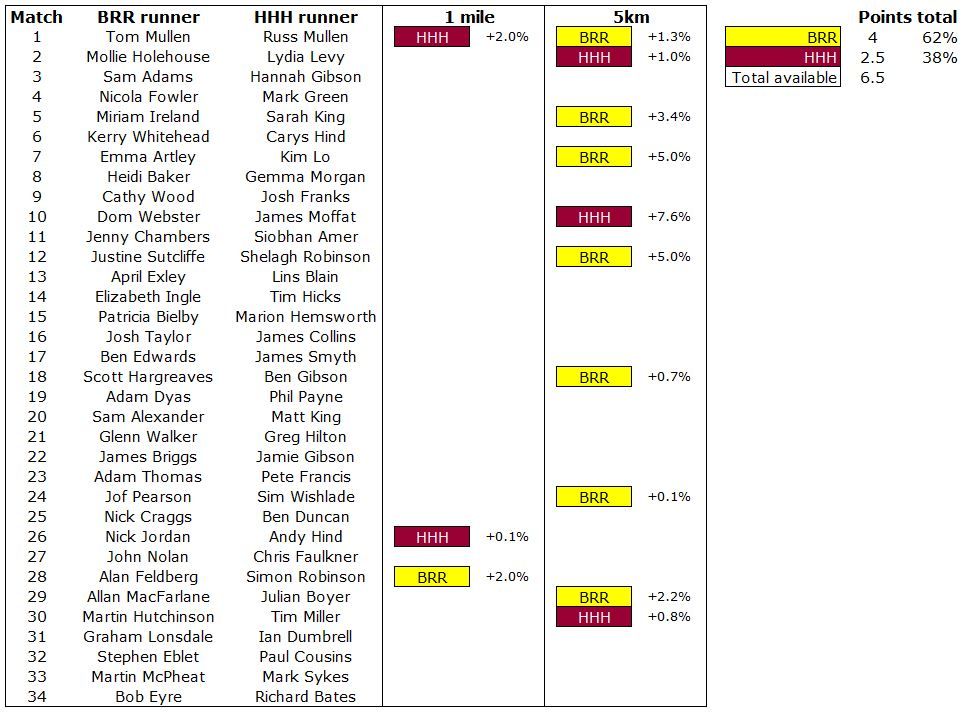 29 out of 136 runs have been completed, and four head-to-heads for an event have been confirmed.  It's great to see some PBs coming through, long may it continue. Please see the table below for the results at the close of the day.  Bridlington have taken an early lead, with a whopping 1.5pts to Haywards Heath's 0.5pts.

Team update: April Exley is stepping in for Caroline MacFarlane in pairing #13 (get well soon Caroline) - Lins Blain you have a new competitor!

All the best for Super Saturday. 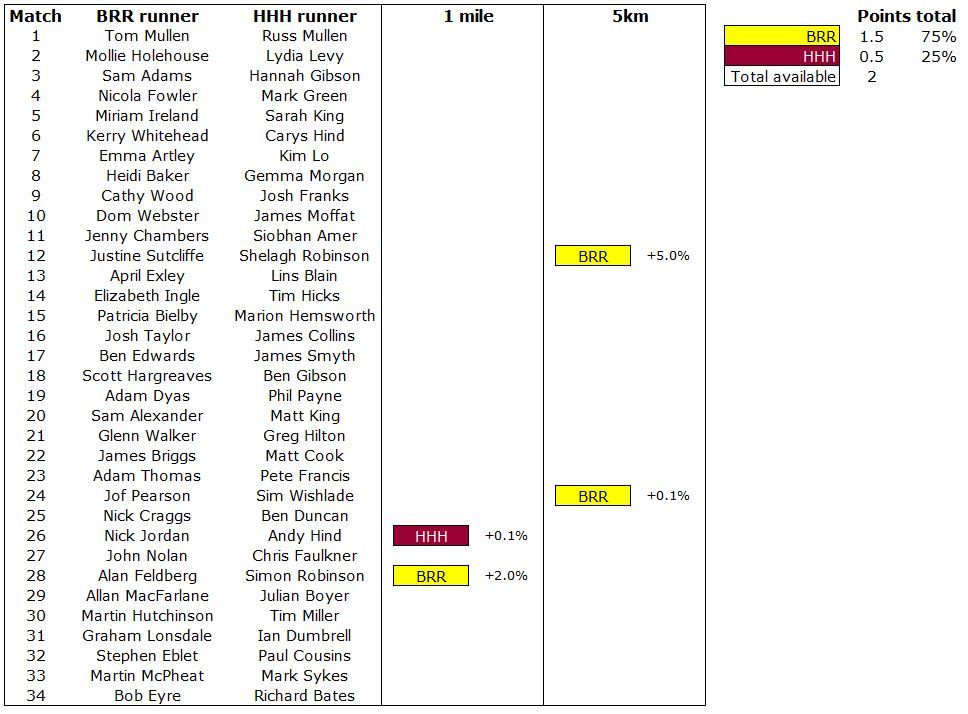 The % stated reflects how much in terms of age grading that the winning runner beat their counterpart by, after applying the relevant handicapping for the pairing.  Bigger number = bigger difference between performances... Two pairings within 0.1% of each other - yikes!

20 out of 136 runs have been completed, but we only have two complete head-to-heads for an event.  The results for these are presented in the table below, and currently it is a tie!

What does the % mean I hear you ask?  The % stated reflects how much in terms of age grading that the winning runner beat their counterpart by, after applying the relevant handicapping for the pairing.  Bigger number = bigger difference between performances... Will Nick Jordan for BRR try another mile attempt to close the 0.1% difference? 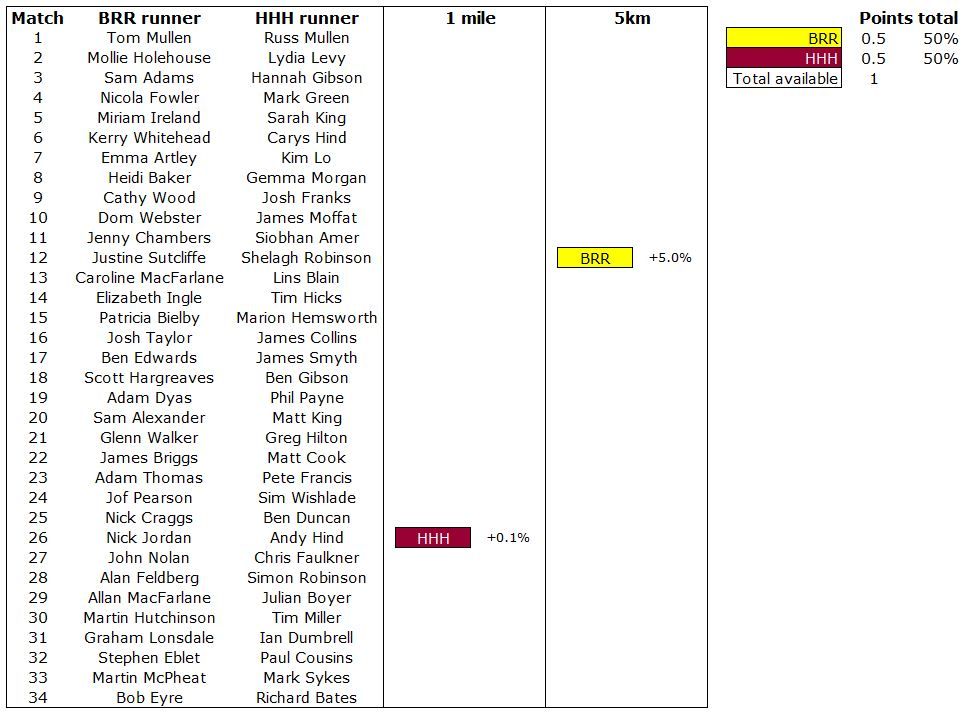 Whilst El Presidente Sports Reporting has had an inside track on the first 5 Virtual Races organised by Harriers, this is not the case for the latest Challenge event.  ESPR has had their credentials withdrawn.  No explanation given but undercover work reveals the nervousness of "Quisling Tom" to be behind the move.

This has not stopped ESPR despatching its newest reporter to the flats of the Holderness peninsula to try to uncover more about the Bridlington side of story.  Whilst the ESPR Accounts department are balking at signing off "ferret food" as a legitimate expense our reporter has filed the following copy.....

Whilst the Mullen match has been announced previously, it seems that Tom's BRR "Harem" have stolen his yellow and black shirt...insisting he wear Beetroot as he lurches downhill into town on the "fast course"  (either that or he'll have to prove his loyalty by running topless - whihc is maybe hoped for).

Harriers Madam Chair has an awesome task ahead in chasing down the 22:20 PB of BRR's Patricia Bielby..

Meanwhile, with Harriers Chris Smith sitting out this race its left to Ben Gibson to take on the Tykes finest.  By focussing on hilly course times (vs the seafront flat best of Ben) it looks like Ben has been damned to chase over minute down his oppo.

All of this points to a lot of skullduggery by our northern "fellow atheletes" to try to ensure victory.  Not least by the insistence that our own Ben Gibson focus on the Spreadhseet work whilst Tom said he'd lead on the athlete match-ups....

Further information on the matchups is proving hard to find with "Quisling Tom" being very hard to pin down.  Work continues.