One correction made to the text within the previous update - Gemma Morgan raced her way to a course PB on the Cuckfidl/HH West route, rather the second best time mentioned previously.  Well done!

This week saw 40 runners complete 48 runs, and importantly for EPSR's recorded keeping - nobody ran on their birthday.

The final results across each of the VR competition elements are provided below.  Congratualtions to all those listed, and well done to everyone that has taken on the courses this week. 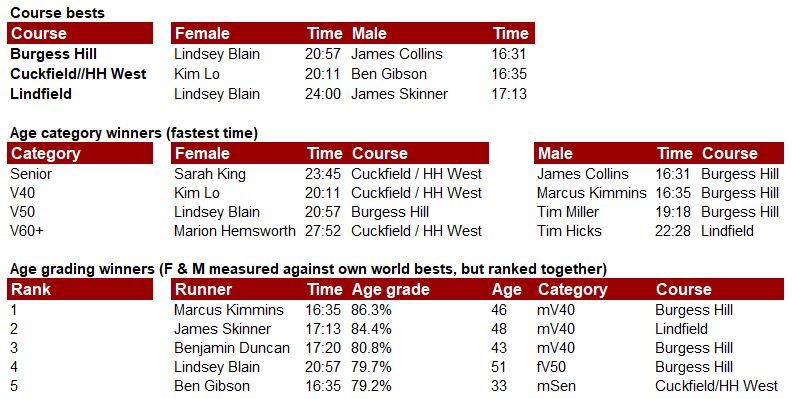 The race window is closed!  Well done, and thank you to everyone that took part in this week's running of the 5k VR series.  If any results have been missed or are not correct, then please drop Ben Gibson a message.

Full results from the competition will follow later this evening (preparing a roast dinner must come first!), but for now please find below a summary of the runners today.  The runners displayed in bold within the tables also include some that were missed from yesterday's results.

Today we saw Tim Miller complete the triple and set another course PB - nice work!  Lins Blain also completed the triple taking on the Lindfield and Cuckfield/HH West courses.  Who knows, maybe that will be the next VR - fastest triple in a day...

The sun has set on the sixth day of racing, and unless anyone decides that a headtorch improves running economy by 4%, I suspect we have seen all the racing for today.

The competiton has stepped up a gear today, with pacers being deployed - well done to Marcus Kimmins (16:35) on pacing James Collins around the Burgess Hill in a time of 16:31...  This means James and Marcus currently stand at #1 and #2 on the overall men's competition.  James Skinner is currently in third place with a time of 17:13 set today on the Lindfield course.

There are too many runners today to mention all here (sorry!), but James Smyth recorded 20:02 on the Burgess Hill course (a 5k PB - well done) and Sarah King (23:45) managed to equal her time from a previous VR on the Cuckfield/HH West course.  Both have reportedly asked for the next coached Harriers training session to include practice at 'ducking for the line'.

Oliver Farr doubled, taking on both the Lindfield and Cuckfield/HH West courses today, while Marion Hemsworth missed out by a smidge on beating her best on the Cuckfeld/HH West course.  El Presidente/ESPR was less than pleased with his time and is apparently consolling himself with a batch of Gluhwein at the HHH club bar until this VR week is over.

Remember that the competition is not just about fastest times, there are age-category and age-grading aspects, and the big reveal for those will be made after the end of racing tomorrow.

The final day of racing (which finishes at 4pm) looks to have fantastic conditions for running, so enjoy it if you are out there.

Apologies to Chris Faulkner for not mentioning his run of 21:47 yesterday on the Cuckfield/HH West course (the pitafall of introducing 'bold' text type in results tables an not applying bold to everyone!).

It seems Chris enjoyed the run so much he did an extra 3km and turned it into an obstacle course avoid dog-walkers!

Strava is showing a flurry of activity this morning, so expect another update around the middle of the day.

New runs for the day are now displayed in bold text in the tables below.

Well done to Lins Blain for a PB of 20:57 on the Burgess Hill course, which takes her to second place in the Ladies course best competition.  Ben Duncan takes top spot in the men's competition with a time of 17:20 around the same course.

Tim Miller completed the Lindfield course, his second 5k VR race of the week, while Tim Hicks took on two courses in one go (madness!), but unsurprisingly didn't fancy make it a triple by jogging to Burgess Hill (nor kite surfing over there as per his recent Strava activities).

I hope people aren't expecting some Mid Sussex Marathon Weekend style medal for doing the triple across the week...

The number of runners posting times on the courses has doubled today - if this exponential increase in runs continues, the race results spreadsheet may be in danger of running out of rows by the end of the weekend!

Well done to Kath Buckeridge on completing the trio of courses, accompanied today by Shiv Amer - will we see a double triple?

Phil Payne and Kim Lo jump to the top of the overall leaderboards, posting speedy times on the Cuckfield/HH West course, Josh Franks managed all the twos with a time of 22:22 and Sarah Hamilton just missed out on a PR for the course.

Hannah Gibson and Lydia Levy clocked identical times on the Cuckfield/HH West course - I'll leave it to Hannah to break the news to Lydia that she'll be a bit ahead on the age-grade results (but then again, maybe Hannah would rather age-grading wasn't in her favour?).

Anyway, the weather looks good for the weekend (but then again, can we really ever trust the BBC Weather app to get it right?).

Kath Buckeridge and Shelagh Robinson ticked off a second VR course run, this time both on the Linfield route.  Kath and Shelagh used the opportunity to increase their mileage for the week as part of the Centurion One Community challenge.  With this one Kath totalled 32.5 miles towards her 100 miles target (and then did another run to make it 39.5 miles so far!), while Shelagh marked up 16.5 miles out of her 50 mile target.  Well done!

Good to see Oliver Farr's name appearing on the segment list with a time of 24:24, and from what we can tell - pretty consistent pacing.

Just one additional runner today, Tim Miller taking on the Cuckfield/HH West course.  We can only presume everyone else is tapering for the end of the week.

He may not have won the club quiz night (well done to David, Marion, Rupert and Simon), but he is winning the Men's competition with a time of 19:27 on the Cuckfield/HH West course - top work!

Day 1 of the race window has passed us by (unless any night-owls give the courses a go!) and four runners have raced today.

Well done for getting out there!

Maybe this is Jason, Kath, Matt and Shelagh lining themselves up to complete all three courses / maybe Kath will run on one of the courses on each day of her Centurion Community challenge... only time will tell.

Results so far are presented below.

Happy running to those heading out on Tuesday.

The next HHH Virtual Race week is upon us.

The race organisers will be eagerly checking Strava leaderboards for the three race segments over the week and preparing 'live' (daily!) updates of the results which will be presented here.

Remember - only your first effort on a given course will count (it is a race after all!)

As with the other runnings of this event (which is fast becoming a staple in the lockdown event calendar - let's hope to not have many more!), results will be presented for Male and Female 'Course bests' during the race week, as well as 'Age category' winners and overall 'Age grading' winners.

On that note, if anyone has a copy of 'Microsoft Excel for Dummies' lying around, then it would be appreciated - likely helping the need for El Presidente/ESPR having to explain to the less mathematically minded of us (Ben) the intricacies and merits of various age-grading comparison approaches to make things as fair as possible.  Anyway...

The 'live' updates of results will include the information below.  We will save announcing the age-grading results until the end of the race window (which should hopefully allow time for that book to arrive...)

Please let us know of any particular achievements, oddities, or indeed if you ran on your birthday (which the statisticians simply cannot wait to happen!) and we will look to record it here.